skip to main | skip to sidebar

Gosh, it's been a while (again - sorry).  I've got my mojo back but wanted to focus on making things and then have never had the time to catch up on blogging them.  hoping to remedy that in the coming weeks - there's a bit of a backlog.

I made this card for the red white and blue challenge over on the MSE cardmaking thread which has been set by cardpaperscissors.

It's made with a lovely freebie from last year by Little Musings.  In my head she's called Nerys but I might well have got that wrong. 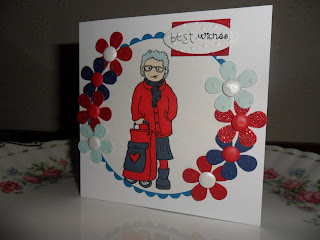 I've recently treated myself to a retro flower punch - you're going to see a lot of it in the next few weeks.  I've used it so much I thought I might be giving myself RSI.  No piece of paper goes in the bin if it is big enough to have a flower punched out of it!.  The flowere are all made from remnants.  Card Candy is from Craftwork Cards.  Circles cut with Nesties petite circle and scalloped circle.

In addition to the MSE challenge I'd also like to add it to the following challenges.

Made this card for my Godson William for his 6th birthday. 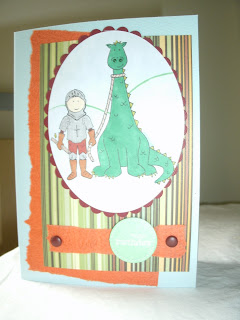 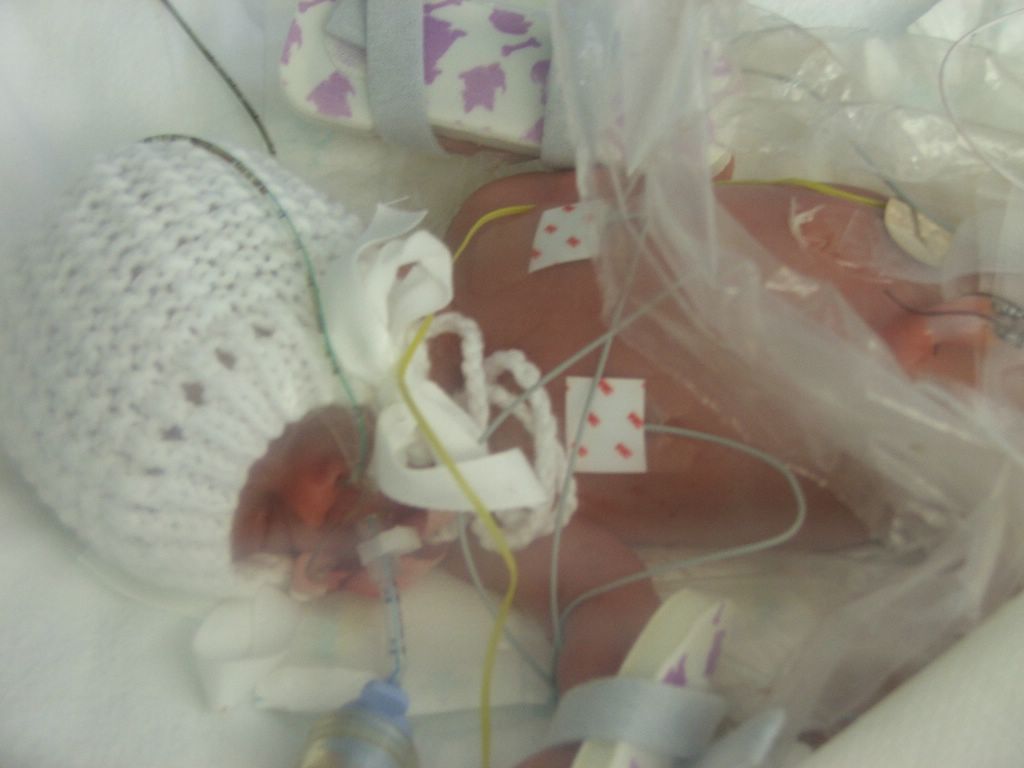 After much concern, and lots of love he's now happy 6 year old who loves Star Wars and Lego.  He's a fighter so I've sent him a car with George and his pet dragon on.
The stamp is by elzybells, stripy paper is from the Earth Love Collection at Cosmo Cricket.
Posted by louisa at Saturday, March 26, 2011 6 comments:

Whoopsie - just realised the challenge was for a "Mothers Day Card" not a card for your Mum.  Never mind eh - If Mothers Day is anything like her birthday I'll be finishing the mothers day card off at 11.30 pm on the Saturday before.

I'm going to claim it fit's the bill as its for My Mothers (birth) Day and hope no-one notices ;-)

I had big plans for this card - you know - pretty stamp, artfully coloured in, glittered and glossed up a bit. artfully matted up and then embellished to the hilt, lace flowers, pearls, the lot.  Sadly, my employer and my son had other ideas and so I was left to start it at 10pm the night before Mum's birthday.

So, cream card blank, punched with a MS punch at the bottom.  Cosmo cricket 'togetherness' background paper.  Alpha stickers by pink paislee, buttons from stash (I think the little yellow ones are by papermania), punched flowers from stash and label cut from the Cricut tags bags and boxes cartridge.  I really really want those punches but everywhere I've looked has only one in stock or charge a fortune for postage. 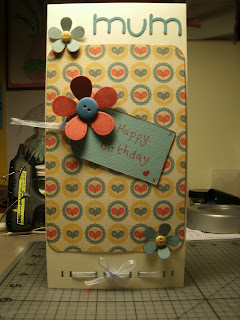 Here's Mum's cake which we also made the night before.  Well I made the cake and "&son" iced it 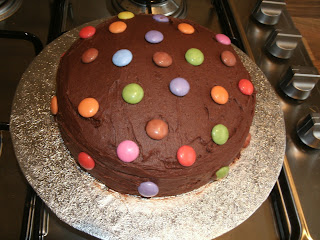 I didn't even get a chance to buy her a present but I took her out to Elsecar Heritage Centre and she chose some pretty teacups and saucers.  Don't tell Dad but she also took a shine to a lovely yew cabinet which cost substantially more than the teacups.  "&son" was unimpressed that we were going to look at antiques until I said it wa slike going to a museum where you could buy stuff.  He was a bit obsessed with the militaria but his favourite item was a cobblers last.
Posted by louisa at Sunday, March 06, 2011 5 comments:

Return of the mojo - part 2

It's &sons Dad's birthday today but for one reason or another he was unable to have him over as is usually the case on a Sunday.  So me and my boy have been having a bit of fun in the craft room.

Originally he was going to make his Dad a card with a Top Gear badge on (I bought a pack of 4 on Friday when I spotted them in the Chemist - wonder if they're some sort of contraceptive advice - seeing a button badge of the stig on the lapel of my lover would certainly put me off!)  I digress.

Inspiration struck when I remembered there was a racing driver on my Cricut - Everyday Paper Dolls cart so we had a liitle play and &son came up with this.  We went through a few different sizes of components but when he'd decided what he wanted I cut a spare set out in case we had any problems further down the line.  We didn't so I figure I may as well use them myself. 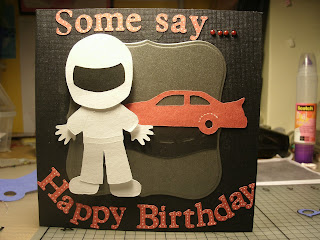 I'd like to enter it in the following challenges

Crafts & Me - It's Red
Stamping with the Dragon - Anything goes
Posted by louisa at Sunday, February 13, 2011 7 comments:

This project has been on my desk since about October of last year.  I'd be lying if I said it was half finished then.  I printed the photo, bought the frame, took out the glass.... and then left it for 6 months.  Shameful behaviour!

I'm off to visit my Granny at half-term and it was my plan that I was going to give it to her at Christmas.  I'm not sure now whether there is going to be room for it in her room in the nursing home but I'll take it down to show her and see if we can fit it in.  Secretly, I'd be quite pleased if not, as I've fallen for it and already have a space picked out in my lounge.

You'll have seen the picture before if you're a long-time follower - it's of My Granny & Grandad on their wedding day. Do you know what my favourite part of the picture is? - my handsome Grandad is carrying gloves.  I miss him soo much.  He died in 2005. 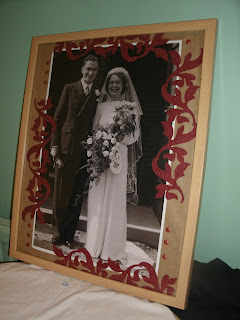 Originally, I'd planned to cut out lot's of dark red hearts to make a frame but I just couldn't get it to work somehow so I went for plan b - I started with brown wrapping paper (for parcels - from the Post Office) and then cutout some borders from the storybook cartridge on my Cricut.  They're embossed on the cuttlebug (divine swirls) and then I've just a added a bit of card candy to fill the gaps.

I'd like to enter it into the following challenges

Bunny Zoe - love is in the air
Incy Wincy Designs - Love
Ladybugs Crafts - Love is in the Air
Simon Says Stamp - Anything but a card
Posted by louisa at Sunday, February 13, 2011 5 comments:

This card is for my friend Ann - I've not seen her for years - we used to go tap dancing together but I had to stop going when I got divorced as I couldn't get childcare.  Spotted her in her car at the traffic lights a couple of weeks ago and looked her up on facebook....and I'm off to her birthday party tomorrow.  Sounds very intriguing including a game called 'spite and malice'............. 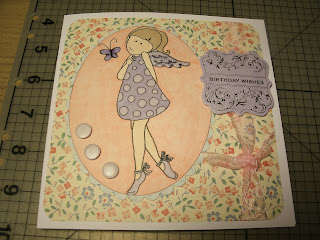 Digi Stamp is a "little musing"
coloured in with promarkers and a little dash of glossy accents & stickles
sentiment and candy by Craftwork cards
Ribbon and paper from stash
I think the thing I am most pleased with is the background colour to the stamp.  It was white card and looked too dark so I coloured it in with promarkers but then decided it was too bright.  So out came the blender pen which I've never really used before and I just went over with the broad tip to make the marbled effect.  What do you think?
Posted by louisa at Thursday, February 03, 2011 8 comments:

Finally getting around to posting pics of (some of) my Christmas 2010 makes.  Believe it or not, I still have one waiting to be given to my sister (I forgot to take it down to her house at Christmas)  So I'll post that after the weekend (don't hold your breath) 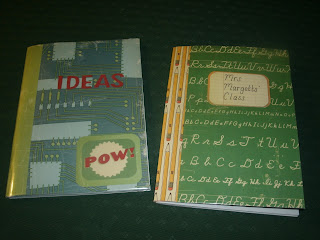 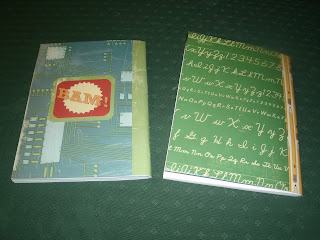 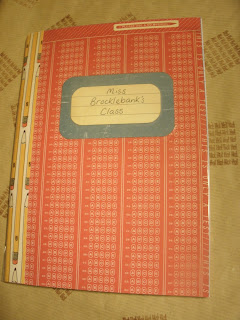 I made covered notebooks for my sister, my friend and her husband.  My sister and friend are both teachers so they got class record books,  My friend's hsband got an ideas book.

They're all covered in sticky back plastic to help them last a bit longer.  Remind me never to do that again - the air was blue!
Posted by louisa at Sunday, January 23, 2011 1 comment: 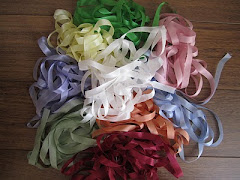 t'other blogs of mine